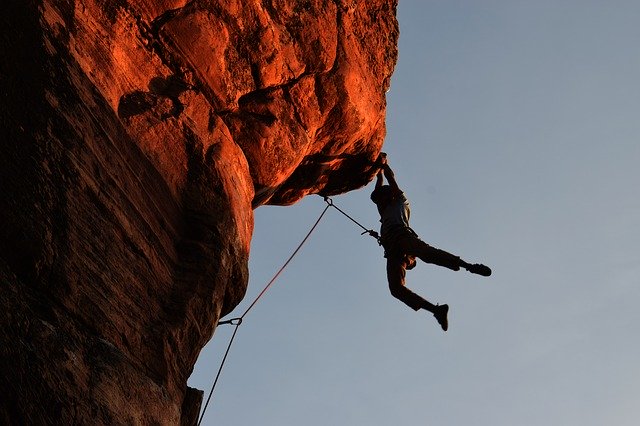 Let me ask you a question! Have you ever been gripped by fear?

Truth be told, I have. Many times.

That being said, let me tell you about what God did in my life to help me to overcome the kind of fear that hindered my walk with God and my work for God.

As a teenager, and even as an adult, I was very afraid of what other people thought of me. I think that part of the fear came from my natural desire to do what’s right. I wanted to do something that everyone would approve of. The problem is, that kind of thinking sets us up for failure. As the Bible clearly reminds us, we can’t serve two masters (See Matthew 6:24). We can try, but believe me, it’s not a joyous existence. After trying to live my life that way, and failing miserably, the Lord opened my eyes to see the truth of His Word!

“There is no fear in love; but perfect love casteth out fear: because fear hath torment. He that feareth is not made perfect in love.” (1 John 4:18)

Don’t worry, this isn’t a math problem! Suppose that two train locomotives are traveling along at a speed of 150mph. One is heading south and one is heading north — on the same set of tracks! Do you see a problem coming? When they are miles apart, there seems to be no problem; one conductor may even be whistling as he enjoys the changing scenery. Eventually those trains are going to come face to face with a major problem, in this case the other train. They can’t move off the track, they can’t stop because they’re moving too fast, they’re headed for disaster.

Now apply that concept to our spiritual lives. Imagine someone is living in bondage to what the Bible calls the “fear of man.” When he tries to please multiple people including himself, it may seem to work for a little while, but eventually he comes head to head with the fact that it CAN’T be done. Many teens are headed for spiritual disaster, because they fail to understand that there is only one set of eyes that we should aim to please. The eyes of God.

So let’s consider the foolish ways that fear causes us to act:

In order to buy something from the store, you’re going to have to hand over some cash (or some method of payment for those of you who are technical). As long as you’re holding the cash in your hand, you won’t get the product that you need. This makes sense from an economic perspective, but it applies to our Christian life as well. As long as you’re holding on to your plans for your life, and refuse to give it over to God, you’ll be stuck where you are. You need to totally yield to His will, and depend on His power. That’s living the Christian life!

Sometimes when I’m presented with an idea, I say no right away, even before I’ve heard it out totally. It’s gotten me in trouble a few times! But it’s devastating to act that way in our spiritual lives. God presents us with opportunities, but we are afraid, and so instead of going forward, instead of taking a risk that will result in bringing glory to the name of Christ, we stand still. Now it’s true that at times the Lord tells us to “be still” but it’s easier to steer a moving car than one that has flat tires sunk deep in the mud!

I know I’m going to be stepping on some toes, but keep reading! Here’s a couple of areas that you need courage to do what’s right. Without that courage, you’ll cave to the fear of man, and you’ll be hindered in your service for Christ.

Trusting God, will help you in the area of friendships. To be honest, there’s quite a few of you that should dump some of your friends. I’ve always preached that you can be friendly to everyone, but you can’t be a friend to everyone. Let me explain. The Bible is pretty clear that the people that we hang around are going to influence us in a significant way. So while we should share the Gospel with everyone we meet, and we should be kind and seek to help others, we can only have true fellowship and unity (friendship) with those who are seeking the Lord.

Maybe you’re thinking, well, Brother Matt, you don’t understand, I’m in a small Christian school and these are all my options. Maybe your church isn’t very big, and there’s only one other family that has teenagers. Believe me, I get it. Just because the Bible has given us instructions, doesn’t mean it’s going to be easy.

Folly
Trusting God will help you avoid folly. I know that every teenager on the face of this earth thinks that they are the wisest person to ever live. I know I did, but when you’re cowering in fear, you might begin to realize that you’re not quite that wise. Learning to live with God’s glory in mind will help you avoid a lot of costly mistakes. (See Genesis 20:11)

You may think that it’s actually a sign of courage to act stupidly, but the truth of the matter is if you really want to show courage, then you must live your life by Bible-based convictions. That’s the truth!

Bro. Bennett grew up in a Christian family and was saved at the age of 9. Through the years of service in ministry, he developed a heart for God and a heart for people. He, along with his wife N'gella, serve on staff at New England Baptist College where he teaches music, composes, and preaches as the opportunity arises. When not in the classroom, you might find him hiking the woods, or enjoying a board game with friends.